It is amazing that even with all the growth in Central Texas that the lakes are still at 35% full.

We can only hope we get a spring like 2012 and start our the year with some good water conservation on everyone's part.

Below is the the link to latest chart released by the LCRA.

http://www.lcra.org/water/water-supply/drought-update/Documents/InflowsTotals.pdf
Posted by Cougar Matt at 12:16 PM No comments:

There is a lot of confusion surrounding using weather reports and historical rainfall ( backyard or online rain gauges )and how much rain actually soaks into the soil profile and goes deep into the root zone of plants and becomes plant available water (PAW.) Rain that gets absorbed into the soil in the exact place it landed is call this EFFECTIVE RAINFALL.

The rule of thumb for scheduling irrigation is to take 75% of all rainfall as effective. On a Day in which we get a nice light rain, few an far between in Central Texas,  75% can come close to reality, but for most of central texas in flash flood alley, this is overly optimistic.

Below is a chart of Wednesday Jan 21 from about 4pm to 9am  Thurday Jan 22nd. We received a total ACTUAL rainfall over an 18 hours period of 2.23 inches ( $5,000 weather gauge measured at LCRA Redbud Center so pretty accurate). The gauge measures and transmits in 15 min increments, so we were able to calculate EFFECTIVE RAINFALL using typical absorption rate of 1/4" per hour ( or 1/16" per 15 min interval ) for clay loam soils. The calculated EFFECTIVE RAINFALL is 1.55 inches. 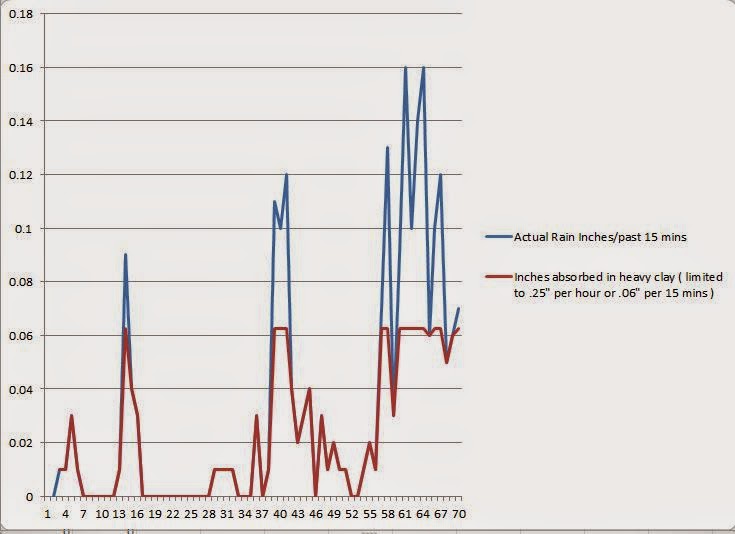 The RED line is water that went into the ground where it landed and was effective. The BLUE peaks are essentially runoff, the water may pool somewhere and not run into the street, but is is not in the same place it landed.

The Effective rainfall comes in at 70% of actual rainfall which is pretty much the highest percentage we can ever expect in Central Texas.  When we see rainfall rates as high as 4 or 5 inches per hours, it is not uncommon to see effective rainfall percentages in the 10-25% range.

If we get back-to-back rain storms and the soil is already saturated ( a term sometimes called FIELD CAPACITY ) , we may not absorb as much of the rainfall rainfall that is considered "effective."

Thanks and happy pondering. Cougar Matt out.
Posted by Cougar Matt at 11:05 AM No comments:

As you can probably imagine with the cool weather and the rain over the weekend, there is NO WATERING REQUIRED this week for warm season grasses, also no watering required for cool season rye grasses.

If you have not already done so, picking up all the fallen trees leaves from the grassy areas will to allow the grass to get some sunlight and dry out. This is the time of year where fungus diseases like brown patch, take-all root rot , and necrotic rings ( aka fairy rings ) can get a foot hold and reek havok on lawns. These diseases typically start in areas where leaves then to accumulate and there is little sunlight and airflow so the grass and the soil does not dry out.

You can learn more from the Texas A&M Agrilife website

What should I be doing this time for year with my irrigation system? After the recent freezes, it is a good idea to walk the yard and look for any mushy spots that may indicate a leak in the system. A lot of smaller leaks are easier to find this time of year as they will not dry out and sometimes only become an issue after these extreme temperature swings where the pipes can shrink or contract over long runs.

How to troubleshoot a leak

1. Check the water meter to see if the small triangle ( unusually red ) is moving or rotating. If it is rotating then
2. Shut off the water to the irrigation system, at or before the backflow.
3. If the triangle STOPS , then there is a leak, mark any suspect areas with a flag or stake and wait a few days to see if the area dries up.
4. Call us to come out an troubleshoot 512-769-2351 or email service@cougarirrigation.com

Posted by Cougar Matt at 6:56 AM No comments:

As you can probably guess, NO WATERING REQUIRED this week ( for warm season grasses ), with more "wintery mix" of weather in the forecast for the weekend and more HARD FREEZES ( 22 degrees predicted for tonight!) on the horizon, a more urgent need is the 3 P's -

1. protect pipes - cover hose bibs - make sure all covers on valve boxes are in place and secure. If you have an RPZ, drain it or install a insulated pouch. Dekorra is the brand we install, although a moving blanket or some towels can be draped over the backflow in a pinch.

2. Pets - bring them indoors, or small insulated pads should help them if their outdoor shelter is sufficient to block the north winds, google the K&H Tan Self Warming Crate Pad

3. Plants - probably the hardest thing to do in central Texas - we have 24 randowm freezes last winter and this year will no doubt be the same.  There are several Tyvek material tarp blankets available, the "kleenex" of these is the planket see below link. http://www.theplanket.com/